Twitter is ephemeral. Tweets are short, throwaway observations, which capture the present moment, flow past quickly and are succeeded by more recent and relevant ones. We’ve looked at a way to favourite tweets, and to bookmark the URLs they may contain, but once you’ve done this, why would you want to keep a tweet? Why would you want to tweet in advance, rather than in the moment?

The Past
You can scroll through your last few thousand tweets or so (which might cover quite a span of time, depending on how prolific you are) but searching and looking at hashtags won’t take you back very far, only a few days. And yet… although finding past tweets might be difficult, they can come back to haunt you. If you want to find a tweet, it might be quite tricky, and yet if you want a tweet to disappear, someone may be able to dig it up!

Deleting Tweets
Let’s look first at deleting. You can delete your own tweets, by hovering over it and using the option that appears below next to ‘reply’, ‘retweet’, etc. If you make a mistake in a tweet, it might be less confusing to send another tweet with a correction rather than delete one that people may already have seen. If you tweet something you shouldn’t… well, don’t! However, you can’t delete someone else’s tweets, so if they’ve already retweeted you, taken a screenshot, or archived the tweet using some of the options below, it might be too late!

But what if you want to keep tweets, either your own or someone else’s? Why might you want to do this?

This will open a new tab/window for that single tweet which contains the URL. You can copy and paste this URL, or save it, bookmark it, embed it in a website, or email it to people.
This might not be the best or most convenient way to present tweets for others though.

Your Twitter Archive
If you want a copy of all your tweets, then Twitter can send you an archive of everything you’ve tweeted. Click on the gear icon, and select ‘Settings’. In your ‘Account’ page, scroll down to the bottom where you will see an option to download your archive: 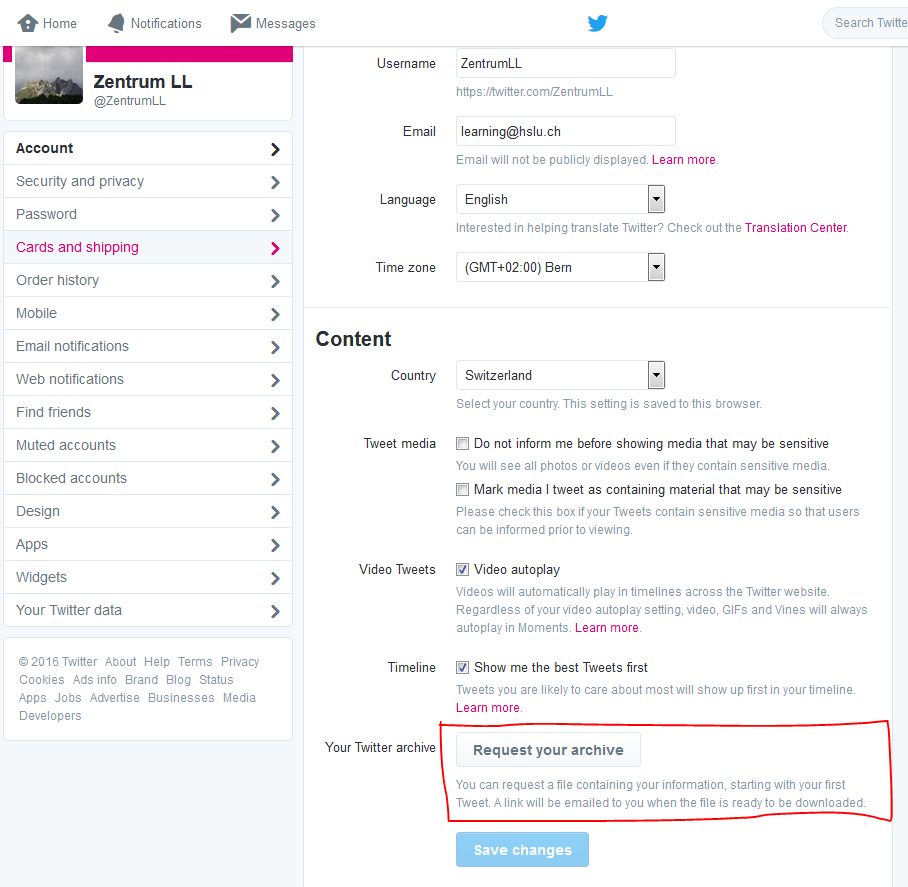 Storify
However, one of the nicest ways to keep tweets, especially for others, is a third party application called Storify. Storify is the tool which makes a narrative overview of tweets and other social media by linking to content on the web, including tweets, websites and blogs, Facebook posts, YouTube videos, or photos on Flickr. You can search for content, drag and drop it into a linear narrative, add some comments to contextualise it, and publish it on the web or share the URL. You are linking to the original source, rather than taking the content, so it doesn’t breach copyright. It automatically notifies people whose content you have used in this way, so if they object to your use, you can edit out their material (all the material visible to Storify is publically visible anyway).

Storify is a really nice way to create and share a summary of tweets and other online material around an event or discussion, such as a conference, blog or livechat. Storify is the tool I used to create a summary of the first week of #WBK10DoT on Day Five.

The Future
And what about future tweets?

You can schedule tweets to send themselves automatically later on. You can’t do this from Twitter itself, but will need to use one of the additional apps mentioned in Days 8 and 9, so you may wish to leave this topic for later if you want to consolidate the basics first.

Although Twitter is a medium which captures the moment, there are several reasons why you might want to schedule tweets for a later time.

You can schedule tweets from both Tweetdeck and Hootsuite. To schedule a tweet in Tweetdeck, for example, write a tweet as normal, and then click on ‘Schedule Tweet’. This brings up a small calendar, where you can choose the time and date when you want your tweet to be sent. 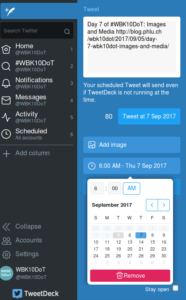 There’s quite a bit there to play with! Well, that’s the last of our Ten Days of Twitter, but don’t worry if you’re still catching up – so are others, and the conversation will be continuing on #WBK10DoT for quite some time, I hope! You might like to keep an eye on the programme hashtag and support learning developer colleagues as they learn how to use Twitter. I hope you’ve found the programme useful, and thanks for joining in! Keep tweeting!

(If you’ve experimented with Twitter and decided it’s not for you, then I hope we’ve helped you come to a better understanding of what it is, and a well informed decision on whether to use it or not. If you now want to delete your account, it’s easy to do so. We encourage you to keep your digital footprint tidy!).